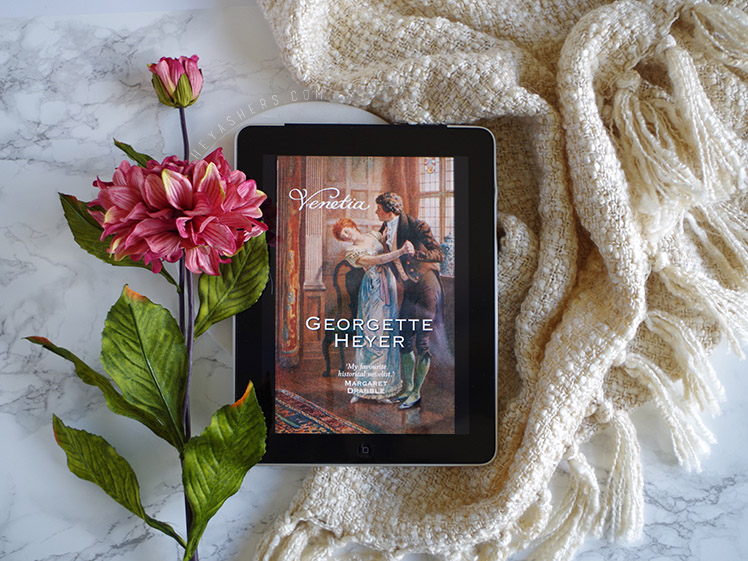 I finished Venetia several days ago, and have spent the intervening time simultaneously rushing through preparations for my grand return to Texas and debating how many stars Venetia rates.

It’s certainly not so bad that I feel justified in spoiling all its plot points, so . . . at least there’s that? With that in mind, I’ll keep this letter relatively spoiler-free, in case you do decide to try Venetia out some day.

A young lady of beauty and intelligence facing an unbearable choice . . .

Venetia Lanyon is one of Georgette Heyer’s most memorable heroines. Beautiful, capable, and independent minded, her life on the family’s estate in the countryside is somewhat circumscribed. Then a chance encounter with her rakish neighbor opens up a whole new world for Venetia.

Lord Damerel has built his life on his dangerous reputation, and when he meets Venetia, he has nothing to offer and everything to regret. As Venetia’s well-meaning family steps in to protect her from potential ruin, Venetia must find the wherewithal to take charge of her own destiny, or lose her one chance at happiness . . .

First I should warn you that I do indeed compare everything of Heyer’s to Pride & Prejudice, which I acknowledge is vastly unfair of me. Getting to it, then!

Round One: The Writing

Austen: Concise and vivid. No unnecessary words, no awkward transitions, tons of humor and sharp wit. Relies more on dialogue than narration to get characters’ emotions/intentions/personalities/interrelationships across.

Heyer: A lot of attention to detail. Wordy and occasionally awkward. Smile- and laugh-worthy humor here and there. Relies heavily on narration rather than dialogue for, uh, everything.

Heyer was known for her careful study of the Regency era, and it shows in Venetia. You’ll love all the period-accurate details–the customs, styles, and language:

But what I struggled with is the vast amount of exposition you have to wade through to get to the action. Frankly, it took me almost three hours to get through the first 30 pages because I found them so agonizingly boring.

Where Austen creates vivid character sketches in just a few sentences, Heyer actually interrupts dialogue to describe (for pages, not just sentences or paragraphs) characters’ appearances, temperament, education, history, family situation, and so on. By the time dialogue resumes, my head’s so full of poorly-timed (and largely unnecessary) background info that I’ve forgotten what the interrupted conversation was about, much less who spoke last and what they said.

Heyer’s work isn’t quite as careful as Austen’s. Occasionally Heyer seems to have forgotten that she already wrote something, and so writes it again just a few pages later, such as when Venetia is reflecting on her first pleasant and intimate conversation with Lord Damerel (pages 64 and 68, respectively):

Fortunately, the dialogue (what relatively little there is of it) is generally realistic and quick-paced, particularly between Venetia and Lord Damerel, and there are occasional images that really leap off the page at me:

Austen: Realistic, engaging, varied. Capable of arousing a deep emotional response: annoyance, sympathy, attraction, disgust, affection, and on, and on.

Heyer: Almost up to Austen’s level, but not quite.

There is as pretty small cast of characters in Venetia so far: Venetia, Lord Damerel, Venetia’s younger brother, Venetia’s two suitors, and a few neighbors and servants. Venetia and Damerel are quite vivid and engaging, but I can’t seem to focus on the other characters at all. They’re there, and some of them have distinct personalities, but I just don’t care–not even enough to get aggravated at Venetia’s unwanted (and persistent) suitors.

But Venetia’s got a sense of humor you’ll love for sure. Take, for example, when she asks her grumpy, scholarly little brother what he’s reading:

She’s level-headed as well as humorous, and both independent and confident enough to take care of herself when she gets into a sticky situation–such as catching the eye of the Lord Philanderer (not his actual name). And more than his eye was caught when they met; Venetia’s skirt was caught in the blackberry bushes she was harvesting, and she herself caught in Lord Philanderer’s (still not his actual name) arms.

Not being the type to, say, have hysterics or faint, Venetia told him in no uncertain terms what she thought of his behavior, gave him a proper set-down, then delivers this parting shot:

I’m not quite as taken with Damerel as I am with Venetia, but that’s because I prefer my bad boys fully reformed (or, at least, under complete self-control) before they meet their heroine, which you might recall from my lengthy rant against a certain jerk a little while back.

A lot of readers do go for sexually-aggressive heroes, of course; the romance genre is full to bursting with guys who, like Damerel (spoiler!), see the pretty heroine for the first time, decide they must have her at all costs, then physically restrain and kiss her despite her angry protests. (Admittedly not the worst thing a romantic hero has done to a heroine at first sight.)

Lord Damerel’s, shall we say, forceful treatment of Venetia upon their first meeting will appeal to many, but it kind of just infuriated me. But otherwise he’s quite attractive! He has a quick and mischievous sense of humor, an even temper, a kindness about him, and a sense of self-awareness (that is, full knowledge of his own flaws, weaknesses, desires, etc.) that reveals that he’s matured out of the willful, hedonistic impulses of his early twenties. (Well, mostly. Assaults in the blackberry bushes aside.)

I’d take a picture of some of Damerel’s best quips for you, but I’m afraid that taking them out of context would ruin them. Sorry!

Round Three: Plot and Pacing

Austen: Quick, with each conversation and event propelling the plot forward.

This goes back to the whole three-hours-to-read-thirty-pages bit. In the first quarter-ish of the novel, events do happen. Characters meet! Conversations are held! There is some conflict (if not quite enough for my taste)! But what’s accomplished in over a hundred pages should’ve only taken, say, fifty at a stretch. Very reminiscent of Victorian literature, actually, which I also have a hard time focusing on.

The plot does pick up a bit after the halfway point, but don’t get your hopes up too high; it hits at least two more stumbling blocks:

Regarding the too-easy-to-believe solution: Venetia realizes she needs to take a certain course of action, and approximately two seconds later A Major Thing Happens that is exactly what Venetia requires for her plan to work. I would’ve rather seen her fumble around for a while first, trying to make her plan work but failing. I like my books to keep me on the edge of my seat, wondering if things are going to work out well for the protagonist. Instead, in Venetia’s case, the solution is dropped into her lap almost before she even realizes that she needs a solution.

As for the conflict resolution issue: there’s no (in my opinion) interesting conflict until the halfway point, when The First Major Thing (unrelated to the previously mentioned Major Thing) Happens. This conflict is fantastic, and did marvelous things to my blood pressure–but it’s abandoned at the three-quarters point and never addressed again. I didn’t need a happy ending to this conflict, but some kind of acknowledgement of it would have tied off this loose end. Because this is the first major conflict in the book, it’s a rather enormous loose end to leave dangling.

So . . . yes. Four stars for Damerel and Venetia being engaging and hilarious and frustrating and romantic. One and a half stars for the plot boring me catatonic with its slowness in the first half, then aggravating me with its incredibility and a significant loose end in the second half.

Let’s just go with two and a half stars, shall we?

Venetia might be a good choice for you if you’re in the Regency mood, but there are better Heyer books out there. Sylvester: or The Wicked Uncle, say; that one earns an easy four stars.

We’ll be landing in half an hour, and soon we’ll be lounging on your couch, stuffed full of delicious Texas food. It shall be glorious.