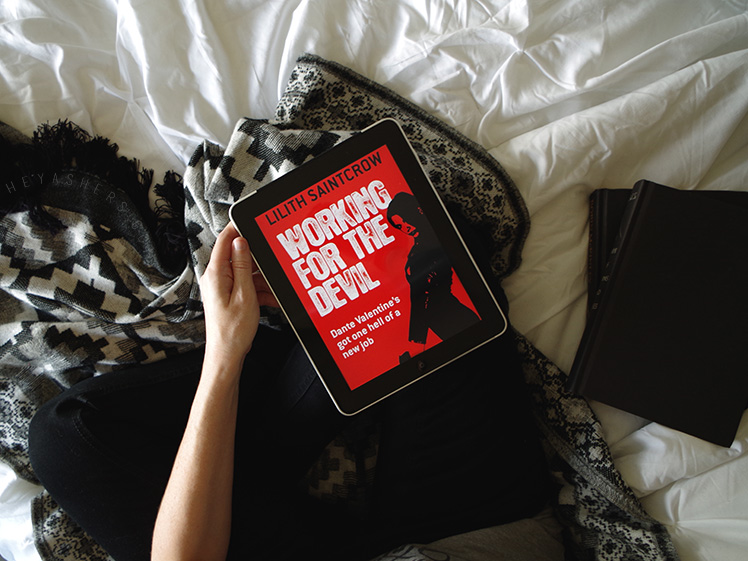 Working for the Devil
Lilith Saintcrow

Due to unforeseen events (of which you and Katie already know the details, so I won’t bore any other readers with them), I’ve read not even a single page in the last week.

I did promise you a letter today, and a letter you shall have! But, uh, it’s actually a review I wrote in 2011, so it’s not as thorough as the reviews I’m writing now, and it has no pictures to accompany it.

I’m just going to copy and paste it here, and hope it entertains you for a minute or two. I know the book would (though not necessarily in a Wow, what a great book sort of way, if you catch my drift).

When the Devil needs a rogue demon killed, who does he call?

The Player: Necromance-for-hire Dante Valentine is choosy about her jobs. Hot tempered and with nerves of steel, she can raise the dead like nobody’s business. But one rainy Monday morning, everything goes straight to hell.

The Score: The Devil hires Dante to eliminate a rogue demon: Vardimal Santino. In return, he will let her live. It’s an offer she can’t refuse.

The Catch: How do you kill something that can’t die?

I’m a sucker for demons. That said, it took me two attempts to read this book. The first attempt ended after about twenty pages; I set it aside for a year, and picked it back up again after a long run of reading nothing but YA. I needed some good adult demon action.

The plot is very interesting–but that’s really the only thing that compelled me to finish the novel. Danny Valentine herself came across as an enormous, one-dimensional jerk (to put it lightly).

When she’s met with anything less than reverence and respect, her instinctive reaction is to physically hurt (or straight-up kill) the other person–even if the other person is her closest friend, who’s just teasing her a little.

A traumatic childhood is hinted at, but never really elaborated on. If that’s supposed to be the reason why she has such a problem with rage that she actually has to fight her desire to maim and destroy everyone who so much as laughs in her presence, it’s not very well presented.

Even when she isn’t holding back from disemboweling someone here or beheading someone there, she doesn’t treat other people with respect, including her few friends.

She gives orders, and has to pry her white-knuckled hand off her sword hilt when they don’t immediately snap to attention and do her bidding. Heaven forbid they want to discuss her plan, or suggest something different. She throws tantrums when somebody kills the bad guy she wanted to kill (even though she never told him she wanted to kill that particular bad guy), when anyone tells her that she’s in danger, when it sounds like she might not be 100% in control of everyone’s thoughts and actions.

(Yet, toward the end of the novel, when the group turns to her for What To Do Next, she moans to herself, wishing they could think for themselves and not always make her the one to come up with the plan. Because she had been so insistent on being in control throughout the novel, this struck me as a strange inconsistency.)

As a result, she reads like a self-absorbed preteen bully who doesn’t know how to share her toys and is really very good at killing things.

Her lack of respect for other people is very noticeable in her interaction with Japhrimel (the “love” interest). He’s given orders, and yelled at if he doesn’t instantly obey them. When he tells her he wants to talk to her about something important, she dismisses him and his concerns without waiting to hear what they are.

(And yet he decides to forsake Hell and become Fallen because she treats him like an equal, and no one’s ever treated him that way? Uh. She treats him like dirt in so many different ways. Their romantic relationship felt completely forced and unrealistic.)

However. Despite all that, I finished the book because I was interested in its plot, and I wanted to know how it ended. And I’m glad I kept reading; its ending was surprisingly good.

All right. I’ll admit I don’t remember how the book ended, so I’ll have to brush up on it before I (eventually) (maybe) pick up the second book, Dead Man Rising. But I do remembering wavering between fury, exasperation, and glee while reading this book, and I remember thinking that you’d find a lot to enjoy (in an infuriated, exasperated, gleeful way) if you ever read it, yourself.

Although it’s possible I’m looking back on it more fondly than strictly necessary. Um.

Hope you’re warm up there,

Katie! Oh, man, I can’t wait to see you. Tonight’s going to be glorious. ❤