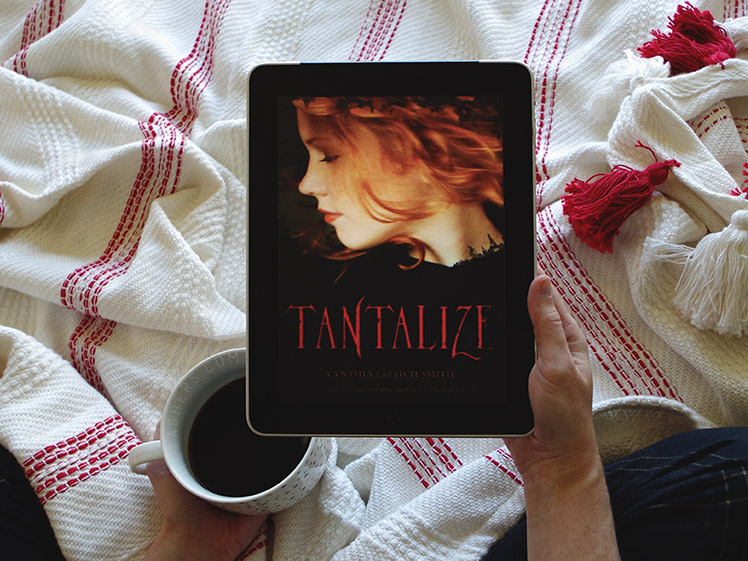 This is not the book for you.

Books have a goal in life, and it’s to mercilessly manipulate a reader’s emotions. The number of emotions I felt while reading Tantalize: zero.

However, it does offer some fine examples of How Not To Write, as well as Things That Will Frustrate Your Readers, so let me spend a bit of time covering those.

Quincie’s a high school senior who was orphaned several years ago, and raised by her uncle (who’s also managing the family restaurant until Quincie is old enough to take it over). When the restaurant begins failing, Uncle Davidson decides to expand and remodel, giving it a classy-Italian-vampire theme and a new name: Sanguini’s.

Quincie’s passion for the restaurant is really neat, actually. I like teenage characters with more on their minds than report cards and the brunet two seats over.

Of course, this book does also have the brunet. She and half-werewolf Kieren have been best friends since infancy, more or less, and she is determined to get things to the next level.

Kieren always shuts her advances down, and she angsts.

Kieren’s preparing for an exam that will admit him into a werewolf pack somewhere far away, and when he passes Quincie’ll never see him again. This topic comes up a few times as a source of momentary angst, but isn’t really developed and seems detached from the rest of the plot–as if it were added as an afterthought when the editor decided Quincie wasn’t angsty enough to appeal to the readership.

Meanwhile, the restaurant’s longtime chef is murdered in a suspiciously werewolfish manner. The police are looking side-eye at Kieren as a murder suspect, causing a bit of anxiety that, like Kieren’s impending departure, feels like an afterthought and is frequently forgotten.

Uncle Davidson hires Henry Johnson as a replacement chef, which results in chapter after chapter of Quincie and Henry (who adopts the stage name Bradley Sanguini for his role of vampire chef) frowning over his vampire costume and the possible menu for the restaurant’s grand reopening. Along with possible dishes, Bradley provides Quincie with gallons of wine which he has (spoiler!) flavored with his own blood because he’s really a real vampire with plans to take over Texas. By feeding the restaurant’s clientele his blood and turning them into his minions. Because…reasons?

Speaking of surprise vampires: Uncle Davidson is also a vampire, and he murdered the old chef so Bradley could swoop in and turn Austin into the new vampire central. Uncle Davidson’s motivation: death is tragic and he can’t handle it.

Quincie learns all this after Bradley has vampified her (without her knowledge or consent). Even more angst-worthy than her new vamp status is Bradley’s ultimatum: either she gives herself to him as his wifey-poo or he’ll kill Kieren. Quincie confronts Bradley, intending to kill him, resulting in the most anticlimactic ending I’ve read in ages. (Don’t worry, I’ll describe it in a minute.)

The Writing Style
Or: These Words Are Not Effective

For a book written in the first-person perspective, Quincie was quite emotionally distant. First person is great for saturating the reader in the character’s experience, but even Quincie’s most emotional moments were bland at best.

Quincie names pretty much all of her emotions. Take, for example, when she calls 911 for a possible breaking-and-entering at her restaurant (Sanguini’s) a few days after the murder of her last chef (Vaggio), and watches from the bushes while the responding Austin Police Department officers seize a man who tells them he was just hired as the new chef:

Let’s say background information is the spices in your coconut curry soup. Too little and the soup is bland. Too much and it’s inedible slop. Not thoroughly mixed in, and one bite will be flavorless while the next burns your tongue off.

Tantalize falls into both the “too little” and “not thoroughly mixed in” categories.

Take the whole silver-bullets-kill-werewolves myth. In this book, werecreatures perpetuated that myth because it helped them keep tabs on humans who were actively seeking to kill werecreatures. The weres were the ones selling the silver bullets, and they’d tail and kill anyone who bought them. How do we learn this? Oh, in a two-page-long (yawn-worthy) flashback sparked by, of all things, empty beer cans Quincie spots in Kieren’s bedroom.

Like a single clump of spice in a bowl of coconut milk, the myth is completely unrelated to the situation surrounding it. Before the flashback starts, Kieren steps out to put his little sister Meghan to bed. After the flashback, Kieren returns to his bedroom and Quincie tries to initiate sexytimes. (Sexytimes are a no-go.)

Does the reader even need to know about the silver bullets thing? Not really. But even if they did, this isn’t the way to go about telling them.

This world contains both werecreatures and vampires, and we learn almost nothing about either of these groups.

What is their social structure? What are their abilities and limitations?

What would their lives be like and their homes look like if they weren’t pretending to be human? Are there places where it’s safe to be publicly a were or vampire?

What kind of laws exist regarding weres and vampires? Are there pro-supernatural lobbyists? How have human/were and human/vampire relations changed over the centuries?

Why aren’t humans as worried about vampires as they are weres? Why the intense animosity between vampires and weres?

No matter how carefully a world is constructed, if the author doesn’t show glimpses of that construction (by answering at least the most basic questions), the result will resemble the set of a really cheap Western movie: a bunch of facades that, upon even cursory inspection, prove to be propped up by two-by-fours.

Tension
Or: Why Am I Yawning, I Shouldn’t Be Yawning

End of the first (dull) chapter:

Later on, Kieren finally figures out that his dog Brazos’s incessant barking signals an intruder (not the smartest werewolf, Kieren), and leaves Quincie in his bedroom while he goes outside to investigate:

Not only is there no tension here, both Kieren and the dialogue are dumb. (This is, by the way, the first time we hear about Cats, and Cats play only a tiny, confusing, unexplained role in the story. So no, “Dogs and Cats don’t get along” doesn’t carry quite the dun dun dunnn that I think it’s intended to.)

Later still, Quincie tries to lure Kieren into her house for sexytimes:

There’s so much potential for awkwardness here! How will Quincie react to knowing Uncle Davidson heard her try to make a move on Kieren? How will Kieren react to almost giving in, only to be caught by Uncle Davidson? I actually did eagerly turn the page this time, to find this:

This is the worst.

I guess Tantalize is supposed to be comedic rather than dark; it’s full of silly puns and “humorous” word choices (scare quotes because I find them frustrating rather than funny).

Take, for example, when Quincie wakes up (from being drugged) to find herself wearing an unfamiliar nightgown, strapped to a bare mattress in Bradley’s unfinished basement. The basement door opens, and in prance Uncle Davidson’s annoying girlfriend Ruby (who sneers at her) and Bradley (who’s holding a knife). Also:

That’s right. She vaguely remembers making out with Bradley after he drugged her; she wakes up tied to a bed wearing clothes she’s never seen before; her kidnapper has arrived holding a knife; a giant wolf is snarling in her face.

And she calls the wolf’s teeth choppers.

If Quincie’s fear was more powerfully portrayed, I could enjoy the humor as, say, her attempt to maintain some sense of calm or distance in what is clearly a terrifying situation. But her fear is as muted as every other emotion in this book, and the humor merely reinforces that impression.

“Romance”
Or: There Is No Romance In This Story

1. Quincie And Kieren Are Not A Thing

Despite all of Quincie’s enticements, Kieren staunchly refuses to take their friendship to the next level. Honorable, considering he’s about to move away.

Well, okay. He gives in once, in what has to be one of the least provocative kisses I’ve ever read:

“[F]orcing my hipbones to rattle against his”? Really?

For some reason–seriously, I don’t know why–“rattle” always makes me think of shaking a collection of teeth in a mason jar. But even without the added weirdness of teeth-in-a-jar, “rattle” is an odd word choice for this situation.

In any case, the synopsis lied: her first love isn’t “threatening to leave her forever.” Her best friend is moving away, and he’s friend-zoned her with admirable determination since more or less day one because he knew this would happen.

2. Quincie and Bradley Are Not A Thing

There’s supposedly tension between them, but I saw zip.

You can’t just tell me there’s a vibe and expect me to buy it. Gotta back those claims up with emotions and, I don’t know, tension-filled encounters.

Conclusion
Or: This Is Not A Satisfying Ending

This story is, ultimately, attempting to say something about loss and the acceptance of loss. Quincie lost her parents, and has accepted that. Uncle Davidson lost his brother and decidedly hasn’t accepted that (hence the whole “Let’s all become vampires so we’ll live together forever” scheme that, uh, ultimately kills him. Oops?). Quincie’s losing Kieren, and fights that loss tooth and claw (har har).

Quincie does finally realize that she must let Kieren go, which is quite a neat way to conclude a novel. Not many young adult novels end with the protagonist saying farewell to the one she loves.

But oh, man, the conclusion is terrible.

Freshly-vampified and desperately-in-need-of-blood Quincie and slightly-wolfed-out Kieren have their showdown with Bradley, whom they promptly discover is too powerful to be killed. So Bradley, ever the gentleman, offers a proposal:

If she doesn’t accidentally kill Kieren, Bradley will bow out and relocate to San Antonio.

She agrees, and Kieren agrees, and while she’s feeding, Bradley natters on about how tasty blood is and how Quincie was just waiting for Bradley to show up and make sure she’s never lonely again, etc.

And this is the very last page of narration:

There is no headdesk gif capable of portraying the intensity of my headdesking over here, so let me make a bulleted list of the problems I have with this.

There are a few good things about this book, as I’ve said: Quincie’s passion for her restaurant; her realization that she has to let the boy go; the fact that it’s set in Austin. I also love that Kieren (last name Morales) is Latino (and biracial!), and described as a person of color. Interracial couples, yes please.

(Although I guess they’re never actually a couple. Uh. Interracial lusting, yes please. And his parents are a legit interracial couple, so there’s that.)

Something else I like: Quincie is ashamed that she chose to trust Brad et al. over Kieren:

I’d like to find another book that plays with this same idea, but is, you know, well-plotted and well-written.

Hope you find some time to relax this weekend!