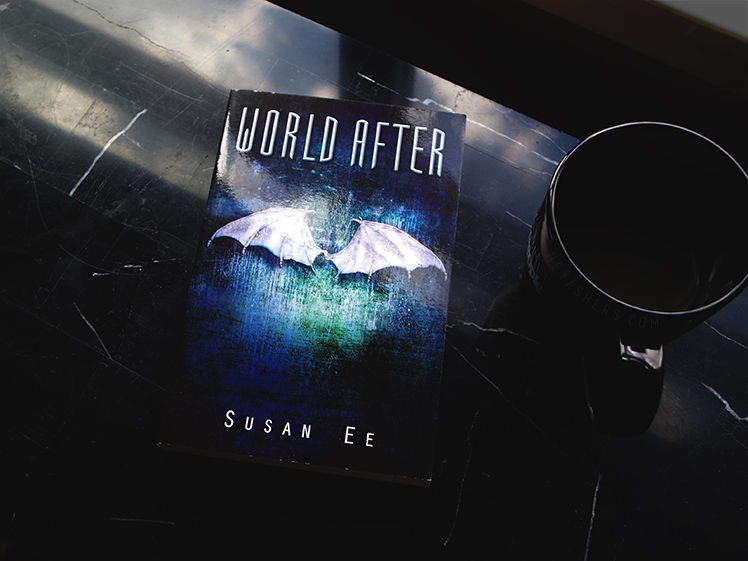 First of all: *congratulatory doctoral confetti!* There will be celebrating, and it will be intense.

So I’d gushed to you about Angelfall a while ago, and I’ve finally gotten my grabby hands on the sequel, World After. I was expecting great things for it—but this book didn’t attain greatness. More of a meh-ness, I’d say.

Let me tell you about it.

Guess I should first refresh your memory about Angelfall.

Human civilization has crumbled after the catastrophic arrival of the (surprisingly cruel) angels. When Penryn’s kid sister Paige is kidnapped by angels, Penryn makes a dangerous move: saving an angel whose wings had just been cut off by the same villains who kidnapped Paige. Her plan is to hold the severed wings hostage until the wingless angel (Raffe) takes her to the angels’ headquarters, where she hopes to rescue Paige.

Penryn, Raffe, and Raffe’s severed wings trek to the angels’ headquarters, where slimy angel Uriel is throwing a 1920s-themed party. Penryn and Raffe infiltrate and save Paige, who’s been experimented on and now seems more monster than human. Meanwhile, Raffe wakes up from surgery with demonic bat wings rather than his own feathered ones. (His nemesis Beliel has stolen and now wears Raffe’s wings.)

In the end, Penryn and monster-Paige are reunited with their mother, but Raffe thinks Penryn’s dead. He disappears in pursuit of Beliel, maybe to never be seen again.

In this sequel to the bestselling fantasy thriller, Angelfall, the survivors of the angel apocalypse begin to scrape back together what’s left of the modern world. When a group of people capture Penryn’s sister Paige, thinking she’s a monster, the situation ends in a massacre.

Penryn drives through the streets of San Francisco looking for Paige. Why are the streets so empty? Where is everybody? Her search leads her into the heart of the angels’ secret plans where she catches a glimpse of their motivations, and learns the horrifying extent to which the angels are willing to go.

Meanwhile, Raffe hunts for his wings. Without them, he can’t rejoin the angels, can’t take his rightful place as one of their leaders. When faced with recapturing his wings or helping Penryn survive, which will he choose?

World After begins a few minutes after the end of Angelfall, with Penryn, Paige, and their mother being taken into the safety of the human Resistance camp, where they really don’t fit in. Paige ends up running away, and Penryn once again sets off on a mission to save her from the angels—but this time without Raffe.

So, what’s to enjoy about this book?

Okay. It’s time to switch from bullet points to a numbered list, because bulleted lists don’t allow for paragraphs of text. Since there are three things in the bulleted list above, let’s start with Point Number Four in the numbered list below. (You love how I structure my letters.)

4. Monstrosity vs. Goodness vs. Appearance

The theme of one’s appearance doesn’t necessarily correlate with how good or monstrous they are is present in Angelfall, but it’s heftier in World After. We have the good angel Raffe with his sewn-on demonic wings:

And, of course, there’s Paige:

Penryn knows Raffe is good despite his devilish appearance, and knows that Beliel is evil even with his beefcake body and new soft wings. The problem for Penryn is Paige; she has a really hard time seeing her sweet little sister in the cannibalistic metal-toothed killing machine that the angels made Paige into. It’s a book-long battle between her sisterly instincts (to protect Paige) and her survival instincts (to keep clear of the monster), and I for one loved watching her struggle.

Penryn also struggled with the weight of her own morality. This is a cutthroat, dangerous world, but her conscience won’t let her turn away from people in need.

As the story continues, Penryn sort of makes herself responsible for an increasing number of people, until, ultimately, that number is too high to count.

Others view her as a hero for the risks she takes and the good she does, but Penryn sees herself as just a teen doing what she can.

Katie, I love this so much.  I’ll never tire of stories about people forced by horrible circumstances to perform acts of grim-and-desperate heroism, but without viewing themselves as in any way heroic. (Correction: I’ll never tire of these stories so long as they’re written at least moderately well.)

There’s not much room for romance in World After; Penryn and Raffe are separated for most of the book, and have very little opportunity to relax and talk when they are together. But the little romantic development we’re shown is delicious. Delicious because it’s not melodramatic or saccharine or earth-shattering. Delicious because it’s quiet and restrained and halting and real.

This is directly related to my praise of the writing style: Penryn doesn’t linger poetically over ever single glance or touch. She acknowledges those brief moments with a succinctness that, for me, reads so much more powerfully than poetic lingering ever could.

Also, this book provides an excellent variation of the Seductive Finger-Licking scene that appalled me in Kiss of Deception. Here’s World After‘s take (in which, I should note, Penryn is not trying to be sexy):

To refresh your memory, here’s how the hot guy (coincidentally named Rafe) responds to the heroine’s (intentionally sexual) finger-licking in Kiss of Deception:

Let’s just stick with the bullet points this time.

So overall, World After felt like a weak recycling of Angelfall. We do learn more about the angels’ Destroy Earth campaign, and Penryn is emotionally (as well as physically) reunited with her sister Paige, but nothing else really changes between the end of the first book and the end of this one. As a result, I was mildly bored for most of it.

I’m hoping World After is just a victim of Middle Book of a Trilogy Syndrome (you know, where the second book is just a weird slog while the characters recover from the Traumatic Awesome Events of the first book and the scene gets set for the Traumatic Awesome Conclusion in the third book). If End of Days is as disappointing as this one, I’ll be devastated; Angelfall sets up a really incredible story, and I want the series to live up to that incredibleness.