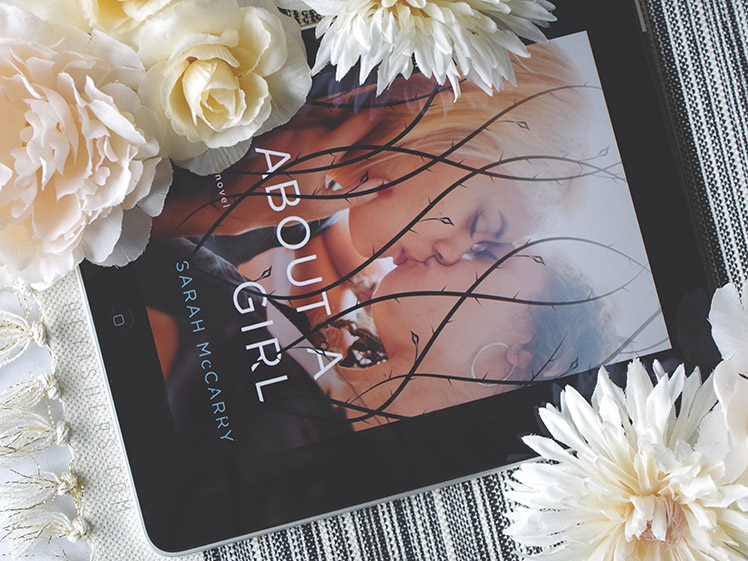 About a Girl
Sarah McCarry

I’m apparently an idiot, because I started reading this book without realizing it’s the third book in a trilogy. I just saw girls kissing on the cover and thought LESBIAN ROMANCE? SIGN ME UP. Oops?

It’s possible I might’ve enjoyed the climax of this book a bit more if I’d read the first two installments in the trilogy first—but the books are set in different times and features different protagonists, so I just skimmed the synopses of those books then dove right into About a Girl.

It did not go well for me, and not because I skipped those first two books.

Eighteen-year-old Tally is absolutely sure of everything: her genius, the love of her chosen family, the loyalty of her best friend, Shane, and her future career as a Nobel Prize-winning astronomer. There’s no room in her life for heartbreak or uncertainty—or the charismatic, troubled mother who abandoned her soon after she was born. But when a sudden discovery upends her fiercely ordered world, Tally sets out on an unexpected quest to seek out the reclusive musician who may hold the key to her past—and instead finds Maddy, an enigmatic and beautiful girl who will unlock the door to her future. The deeper she falls in love with Maddy, the more Tally begins to realize that the universe is bigger—and more complicated—than she ever imagined. Can Tally face the truth about her family—and find her way home in time to save herself from its consequences?

There was so much potential in this book, and I’m really disappointed to give it such a low rating.

But there are readers who’d love this writing style, and who would feel more of a connection with Atalanta than I did. Those readers might be able to overlook the lack of conflict and plot, and just be swept away by her journey and discoveries.

You might really enjoy this book, Katie, especially since you’d relate to Atalanta’s scientific view of the world and life. But if you do give it a try, you might want to read the first two in the series first, to give this one a clearer context than I got from just reading their synopses.