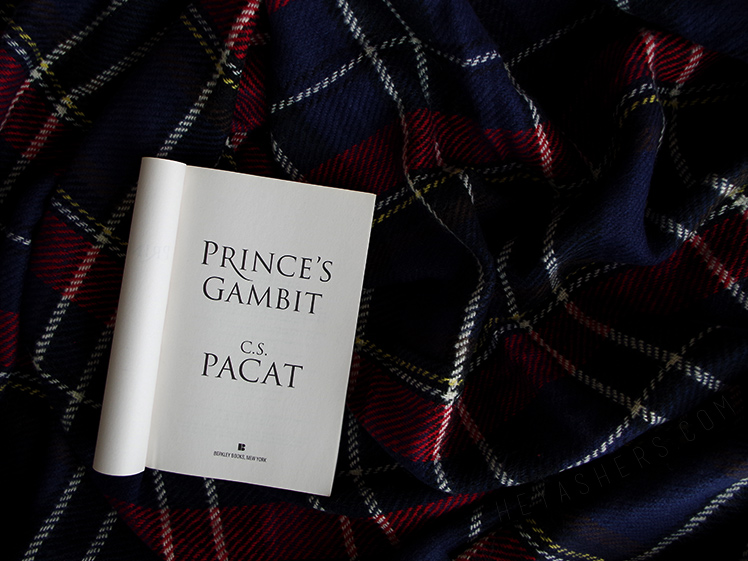 I’ve finally read Prince’s Gambit, sequel to the glorious Captive Prince. And I.

*Throws at it all the stars.*

(This review will be spoiler-free, because *hurls more stars.* And also because my Obsidian snark is consuming my every spare moment, and I have some other stuff going on that’s keeping me away from my computer, and I just don’t have time to write a lengthy review. I’m sorry. But hey, check it out: my first review of 2017 is 4.5 stars and an LGBTQIA+ fantasy! Starting the year off right.)

First, let me craft for you a quick refresher on Captive Prince, which you’ll remember I lost my shit over this summer:

One not-so-fine day in the country of Akielos, beloved King Theomedes dies after a long sickness—so his bastard son Kastor immediately ships Crown Prince Damianos into sexual slavery, and claims the throne for himself.

Because being enslaved isn’t awful enough (that’s sarcasm, note), sweet dumpling Damianos (a.k.a. Damen) is given to the vicious Prince Laurent of Vere, enemy of Akielos and little brother of golden Prince Auguste, whom Damen had killed in an almost mythic battle several years earlier.

Damen endures vomit-worthy abuse as Laurent’s slave, and pours all his (significant) princely will into hiding his identity and escaping his captivity. Until, that is, he discovers that Laurent is the only person who can prevent an all-out war between Vere (led by Laurent’s scheming uncle, the Regent) and the splintering Akielos. (Turns out Kastor’s not a great king after all, who’d’ve guessed?)

Because watching his country get torn apart by war sounds awful, desperate precious Damen swears to do whatever it takes to protect and aid Laurent in this next, most dangerous stage of Laurent’s power struggle against the Regent. The book concludes with our princes preparing to head to the Vere/Akielos border with a little troop of soldiers (most of whom are loyal to the Regent, and are therefore quite probably under some kind of order to help Laurent break his pretty neck in an “accident” at the first reasonable opportunity).

Things are looking grim; will our princes be able to survive the Regent’s assassinationy schemes?

With their countries on the brink of war, Damen and his new master, Prince Laurent, must exchange the intrigues of the palace for the sweeping might of the battlefield as they travel to the border to avert a lethal plot.

Forced to hide his identity, Damen finds himself increasingly drawn to the dangerous, charismatic Laurent. But as the fledgling trust between the two men deepens, the truth of secrets from both their pasts is poised to deal them a final devastating blow . . .

This book wasn’t without its issues, but they weren’t severe enough to seriously detract from my overall enjoyment, thank goodness.

Issue One: Too Much Repetition

The events of (much of) this book were very repetitive, which doesn’t make for the most exciting reading. I wasn’t bored, and I didn’t want to put the book down, but I was starting to squirm for something new to shake things up. (Don’t worry; the new stuff did come. And when it came, it was great.)

The stakes and emotional impact of this book weren’t nearly as high and intense as those of Captive Prince. I wanted Prince’s Gambit to ratchet everything up to the next level, not relax and sit back a little. That’s not to say the stakes and emotional impact of Prince’s Gambit are disappointing, though; they just don’t compare to the extremity of its prequel.

But, honestly, I doubt it could have maintained Captive Prince’s momentum, anyway. This isn’t a problem of writing or editing; it’s just an effect of Damen’s changing position, which is significantly better/more empowered in Prince’s Gambit than it was in Captive Prince.

However, the change and growth of Damen and Laurent’s relationship adds a new dimension of tension and stakes that were absent in Captive Prince, and you will never hear me complain about that.

Readers should (again) be warned that this book doesn’t shy away from the topic of rape, including the abuse of children. Nothing is shown explicitly, but it is referenced in ways that some readers will find disturbing.

Slavery is also an issue, of course, and I do want to focus briefly on that.

Laurent’s kingdom, Vere, frowns on slavery as a barbaric practice; however, Veretian nobles do keep personal “pets,” which are something like expensive and exclusive courtesans.

Damen’s kingdom, Akielos, does practice slavery (not of other races, but of their own people). Damen, the heir to the Akielon throne, begins the series believing that slavery is a normal and great thing. Through his experience as a slave in Vere, Damen’s attitudes toward slavery as a whole begin to shift. The shift is a good thing—he has a growing distaste of slavery as an institution—but the shift is not a focal point in the series (thus far).

The books do not romanticize slavery, and they do focus heavily on the powerless/empowered dichotomy across many types of interpersonal relationships, but the issue of slavery itself is not a significant focal point (thus far). I’m hoping it’s more explicitly confronted in the final book in the trilogy, Kings Rising.

I’ll admit that, immediately after finishing it, Prince’s Gambit felt like a mild let-down in comparison to its prequel. A four-star read, perhaps. But exactly (approximately) a day and a half after finishing it, I wanted to reread it—and considering how long it usually takes me to want to reread a book (a year or more, on average), that’s a big deal.

And the fact that I then reread it, and enjoyed it even more the second time around, should say something.

Now excuse me, I have a snark to continue.