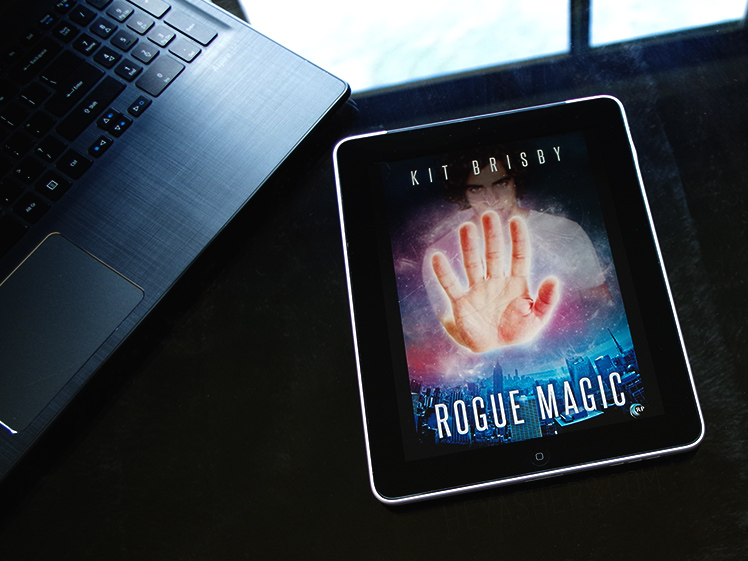 Check it out, my second ARC! This one has magic and gay guys and super important anti-bigotry messages. And—check it out—a good rating from me, holy heck.

It’s Rogue Magic by Kit Brisby (whom I erroneously assumed was a gay male author, whoops), and will be released for purchase tomorrow, January 30. I received my advanced reader copy from Riptide Publishing, who graciously smiled upon my NetGalley request. Thanks, Riptide! Of course, no matter how much I appreciate them, even the most gracious smiles won’t affect my review or rating.

While trapped in a stalled subway train on his morning commute, PR rep Byron Cole flirts with Levi, a young waiter with adorable curls. But Byron’s hopes for romance crash and burn when Levi saves him from a brutal explosion—with outlawed magic.

When Levi is imprisoned, Byron begins to question everything he’s ever believed. How can magic be evil when Levi used it to save dozens of lives? So Byron hatches a plan to save Levi that will cost him his job and probably his life. If he doesn’t pull it off, Levi will be put to death.

Byron discovers that he isn’t the only one questioning America’s stance on magic. And he learns that Levi is stubborn, angry, and utterly enchanting. Time is running out, though. Byron must convince Levi to trust him, to trust his own magic, and to fight against the hatred that’s forced him to hide his true nature his entire life. The more Levi opens up, the harder Byron falls. And the more they have to lose.

Let’s make this quick, starting with the good stuff:

And some bad stuff:

The book really does suffer from its technical shortcomings (which I’ll expand on just a little bit more below); but I am in love with this book’s message, and would definitely recommend it.

WHERE IS BYRON’S CHARACTER ARC

The first portion of a novel (maybe quarter-ish or less, generally?) has a lot of work to do; it introduces the world, the characters, the upcoming conflicts, and—this is super important—sets up the foundation for the protagonist’s character arc.

I went into this story expecting to, you know, be shown the world, meet our protagonist Byron, and see him casually living his (socially conditioned, unquestioned) anti-magic bigotry. After all, shedding that bigotry is the character arc the synopsis had laid out for him. That character arc will only be convincing and powerful if we actually see him being an unthinking bigot first.

But nope. I actually thought my copy was missing a few chapters at the beginning because it skips the world/character/conflict/arc set-up phase entirely, and throws the reader right into the main conflict.

Here’s what happens in the first chapter (which, according to my ebook version, is eight pages long):

You read that right. Within the first eight pages of the book, Byron’s already had his First Major Character Arc Revelation—something that typically doesn’t happen until closer to the one-fourth-ish or one-third-ish point of a novel. And by the one-ninth point, Byron’s wholly converted away from bigotry and is risking lives (more than just his own!) to carry out his Save Levi From Evil Cole Industries plan. One-ninth. If the novel had adhered to a more standard pace, it should’ve still been in the middle of the set-up phase.

I won’t lie, what excited me most about this book (aside from the fact that it’s a gay novel with magic) was the prospect of watching Byron slowly change from casual bigot to pro-mage activist as a result of meeting/falling in love with Levi. But that change took all of two seconds, and as a result his arc felt both shallow (to me) and unearned (for Byron). I was crushed.

Unfortunately, we’re given almost no information about magic or its history—and seeing as how the whole point of this book is to highlight how awful it is for a society to view some of its own people as sub-human, I really needed to know more about how this level of prejudice developed.

And I really needed more info on how the Evil, Anti-Magic Cole Industries gained the power it has—especially because Cole Industries is orchestrating the so-called “terrorist bombings” that have been killing hundreds (and injuring thousands) in major cities across the US every year, and blaming those bombings on rebel mages, and the US government knows and is totally cool with Cole Industries doing this, because the bombings drive up the public’s fear of mages and . . . uh . . . perpetuates the bigotry that keeps Cole Industries rich enough to pour its money into the government? I have no clue, guys. This all sounds deeply implausible to me, and only additional world-building would help me make sense of it.

So why am I recommending it?

I can’t praise the book’s message enough, guys. In light of recent, president-related events that make me nauseous to even allude to, our global need of anti-bigotry, anti-corporate-greed, pro-human-rights, call-to-action stories has shot up from God Yes We Need Them to WRITE ALL OF THEM, PUT THEM ON ALL THE READING LISTS.

And honestly, I do think that (in an explicitly message-focused book like this one) having a powerful, necessary message is more important than having characters and a plot that are full of twists and surprises. Sure, twists and surprises would’ve made for more engaging reading, but the lack of them doesn’t necessarily diminish the power of the message.

Not the Plot I Expected

There are (as I’ve grumped about before) approximately billions of stories about rebels fighting against The Conquerors/The Government/The Evil from the outside, and that’s what I expected this book to become. I was waiting for Levi and Byron to escape Cole Industries, join up with other rebels, and fight Cole Industries from the outside.

Instead, we watch as Levi is tortured and experimented on, as he confronts his impending death, as he (with Byron and just a few others) scrapes up the terrified courage to do whatever little thing he can to bring Cole Industries down from the inside.

And yes, I know there are other “rebel is drawn into the heart of The Evil and takes it down from the inside” stories, but off the top of my head I can only think of one (An Ember in the Ashes) that upset me—to the point of turning my stomach, even—as I watched what happened to said rebel inside said Evil’s lair. Most of the other stories involve a half-hearted attempt at subjugating the lower classes, some ridiculous subterfuge, maybe a few explosions, and a great deal of angsty romance.

I’d be much less hesitant to pick up rebel stories if I knew they were going to be as grimly realistic as this one.

The romance between Levi and Byron didn’t quite blow me away, but I loved how it began with vague attraction and very, very slowly grew into something more—and that both men acknowledged (out loud!) that it’d be pretty messed up/morally questionable to enter into a romantic relationship while Levi’s still imprisoned by Cole Industries.

See, Byron is the nephew (and sole living relative) of Warren Cole, founder and leader of Cole Industries, the wildly powerful company that develops and produces anti-magic technology, and is tasked with containing/neutralizing all magic in America. Byron works for Cole Industries as a PR rep, which isn’t a prestigious job, but his relationship with Warren gives him extra power in the company.

Levi, on the other hand, is a prisoner/lab-rat confined to Cole Industries laboratories, where he’ll be experimented on (and tortured) to death.

There’s a severe power imbalance in their relationship that only Levi’s freedom can correct. The men acknowledge that, and try to resist falling into a relationship. They fail, but hey, I’m thrilled that the book spelled out This Could Be A Potentially Abusive Situation for the reader.

Honestly, I don’t read capital-M Message Books very often, and this is definitely one of those. I prefer my books to present quieter themes and messages while their protagonists, you know, flail swords from atop their dragons and whatnot. If I’d known that Rogue Magic was a Message Book, I might have been a little less inclined to read it.

So I’m glad I didn’t know. I needed to read this, and I’ll bet others need to as well. We need these call-to-action books, and we need them everywhere.

But I’m struggling to rate this book, guys.

It’s somewhere between two and a half and three and a half stars, for sure. If I was rating it as a regular novel, I’d probably give it two and a half; it kept me engaged, but its shortcomings are significant and frustrating. But because it’s a Message Book, and it’s a message I’m especially invested in (and I’ve been in a heightened state of Horrified Fury since the election) . . . I don’t know, guys. I think I’m going to go with three stars, and the acknowledge that it might deserve an extra half star. This is a book with a heart of gold.