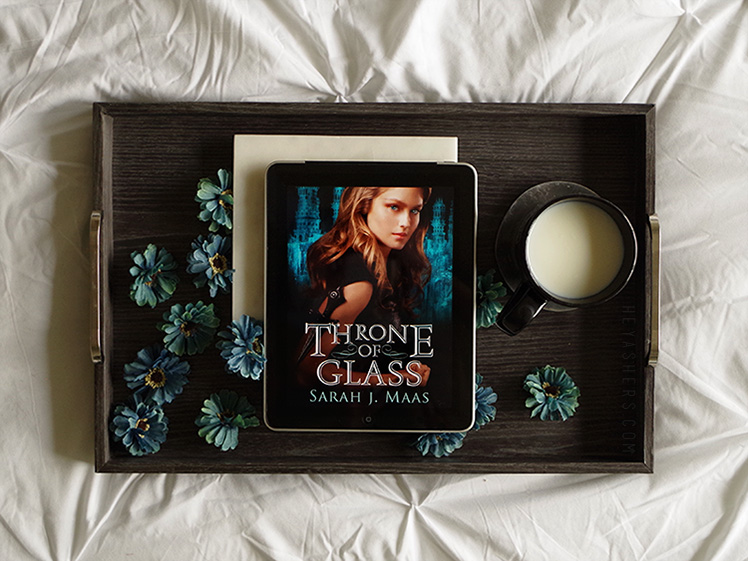 Everyone and their goldfish has already read this book—and I’ll admit I’d  skimmed through the first several chapters years ago. The series has a huge and startlingly enthusiastic following; its critics are vastly unnumbered.

My goal: to make a ridiculous book enjoyable by recapping its key points, ranting at its offenses, and complaining about my horrible life choices.

Note: Click on the chapter number to read the full snark.

Our heroine assures us she’s a badass beyond compare with zero redeeming qualities. Surly Chaol of Westfall, poorly-chosen Captain of the Royal Guard, escorts Celaena to the salt mine’s inexplicable throne room, where awaits the handsome Crown Prince of Adarlan.

Adarlan’s Crown Prince Dorian (who’s a dick) summons Enslaved Assassin Heroine Celaena (who’s insufferable) from the salt mines to confirm she’s pretty underneath all her dirt, and tells her he has a proposition for her. Celaena, who dreams of killing everyone and escaping into the woods, replies, “I’m listening.”

Supposedly Badass Assassin Celaena agrees to participate in the ridiculous contest that will determine the King of Adarlan’s new Champion/personal assassin; Potentially Dumb Prince Dorian will be her sponsor.

Chatterbox Celaena begins her journey toward the king’s city; along the way, she and Grumpy Dude Chaol confirm they’re of similar ages and single, and Chaol kindly offers to gag her for the remainder of the journey. Hot!

Magical Assassin Celaena travels through the forest while info-dumping her childhood trauma and the disappearance (ha!) of magic from the land.

Our traveling party camps within sight of the king’s glass castle, and Beautifully Sad Celaena reveals the horrors of her life in the mines.

We finally arrive at the glass castle, where Infuriatingly Misogynistic Celaena gets gloriously taken down several pegs by her new servant Philippa, and the King of Adarlan smacks the handsome off Prince Dorian’s face.

Brave Assassin Celaena tours only the non-glass portion of the castle, gets some books, and almost beans a noblewoman with a flowerpot.

Modestly Modest Celaena’s admiration of her own stunning beauty is interrupted by Surly Dude Chaol’s hard-on; together they run through the terrifying glass castle toward her first meeting with the terrifyingly kingly king.

Celaena, Dorian, and Chaol bow to the king; later, Celaena and Dorian bond through a rousing game of tag-team cruelty towards a pretty young noblewoman they both inexplicably despise.

Proficient-In-All-Deathtools Celaena loses against Weirdly Unemployed Captain of the Royal Guard Chaol in the most unrealistic fencing bout I’ve ever read.

Killingest of Killers Celaena scoffs and smirks herself to exhaustion while meeting her fellow competitors.

A competitor is spectacularly slaughtered, but Assassin Celaena and Captain of the Royal Guard Chaol are too busy  to care.

Our charming heroine and Totally Inept Personal Trainer Chaol bond as she pukes, and a random Champion tries to add a touch of grimness to the story by committing suicide-by-archers.

Incompetent Princelet Dorian sulks incompetently about his princlethood before condescendingly offering to teach Princess Nehemia how to hack about with a sword.

Angry Dad Chaol grounds our fair heroine, who gives an impassioned rendition of the standard teen “I hate you” speech and locks herself in her bedroom to sulk.

Lady Kaltain proves herself a better heroine than Celaena. Meanwhile, Surly Captain Chaol refuses to believe he’s in love with Celaena, and Incompetent Prince Dorian refuses to believe a gruesome creepy murder is cause for concern.

Celaena tries to convince us she loved some dead guy named Sam, while Dorian considers whether or not sexxxing Celaena would be worth his father’s and Chaol’s (and Celaena’s) ensuing wrath.

Noble Celaena uncharacteristically prioritizes Handsome Thief Nox’s life over successfully completing the second Test, and flings herself off the castle walls to save him from plummeting to his death.

Super Heroine Celaena saves Nox from death-by-splatterment, and goes on to pass two more Tests off-screen. Meanwhile, another competitor is disemboweled and dismembered, which Captain Chaol, Smart Guy, seems to dismiss as a freak accident.

Celaena finds a secret escape route from the palace and opts not to use it because to hell with logic, this book has a plot to follow. Later, Fucking Awful Guys Dorian and Chaol tussle over who gets to watch her sleep without her permission.

A dead Fae queen arrives in a dream to tell Celaena the book’s plot and her role in it.

A third Champion is mutilated to death, Chaol and Dorian wonder if three identical mutilations make a pattern that someone should be concerned about, and Heroine Celaena decides she’s not up for being this book’s heroine after all.

Celaena learns a ton about Wyrdgates, but fails to deduce how that info might apply to the murders (which might, she thinks, possibly perhaps be ritualistic in nature, maybe).

Angry Two-Year-Old Celaena and Misogynistic Prince Dorian bond over a game of pool.

Celaena FINALLY fights someone (passing another Test with ease), and Kaltain psychs herself up to wrangle a marriage proposal from Prince Dorian.

Three more Champions are murdered, Celaena like-likes Prince Dorian, and Chaol has no idea what’s going on but thinks Duke Perrington’s face is evil enough to somehow be involved.

Another random Champion’s been Eviled to death off-screen, and Dead Fae Queen Elena helps Celaena cheat on her next Test.

Celaena and Nehemia bond over puppies, and Hulking Brute Cain conveniently pantomimes that he’s probably involved with the Lurking Evil.

Some Eyllwe rebels are slaughtered off-screen, and Lady Kaltain decides to take Celaena down (for real this time).

Three more Tests and three more murders have been accomplished over a few weeks that pass entirely off-screen. On-screen, Celaena finds Wyrdmarks under her bed, and decides Nehemia’s a better candidate for evil than Cain.

Celaena becomes EVEN COOLER by receiving a public blessing from the Goddess of the Hunt (via a child representative) at the Yulemas morning service.

Celaena Vanna-White-reveals her true identity to Nehemia, who’s appropriately awed. Later, the king of Adarlan returns to the castle.

Celaena convinces Handsome Thief Nox to drop out of the competition. Later, she gets hot and heavy with Dorian.

Cain wins the first round of the duel, Nehemia gives Celaena her fancy staff, and Celaena thanks Chaol for giving her freedom “meaning,” whatever the fuck that means.

Celaena drinks poison, gets her ass thoroughly handed to her by Cain, and is assaulted by demons.

Deus Ex Machina Elena poofs in to save the day/Celaena’s ass.

Totally Competent Heroine Celaena wins the duel (with magical help from Nehemia and Elena), Chaol kills Cain (then angsts about it), and Kaltain’s dragged off to prison.

Dorian convinces King Dad not to take Nehemia hostage. Later, Nehemia info-dumps the details of her heroine deeds and abilities.

Celaena wraps Chaol in her tenderest, sexiest, most platonic embrace, then rejects Dorian because she plans to move away in four years.

Our heroine signs the contract that’ll bind her as King’s Champion for four years, and she’s super excited about it. THE END.